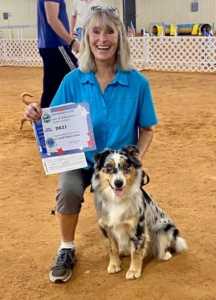 Joni Puckett is a retired schoolteacher.  Her passion for dog training began in the 1970’s while attending classes with the Alamo Dog Obedience Club and German Shepherd Dog Club of San Antonio. She enjoys competing in obedience, rally and conformation shows and earning titles on her dogs while making new friends along the way.

Joni has been giving private lessons from her farm for over 30 years. Her goal includes helping develop a strong owner/dog bond while ensuring positive communication, and providingtools to promote training for a lifetime of shared enjoyment.

Her classes will cover the basics such as: walk on a leash, sit, stay, come, down, stand for examination, meet a friendly stranger, don’t jump on me, and leave it alone.

Joni is an AKC certified Canine Good Citizen instructor, and will introduce some required skills toward certification for CGC testing. She looks forward to meeting you and your pal. 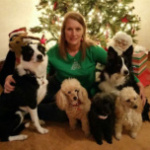 Debbie has a passion to help people to have better a relationship with their dogs at home in every day life and in the dog sports of rally, competition obedience, agility and Fast CAT. Her dogs also train in barn hunt, Scent work and dock diving. She has achieved over 30 obedience & rally titles on 5 different breeds of dogs and 30 AKC & USDAA Agility Championships & titles on Toy Poodles, Border Collies, Shelties, Silkies, Springer Spaniels and all-American dogs. Her toy poodle, April, was a three-time 8" AKC National Agility Champion. Toy Poodle, Raven, was the AKC 4" Performance Agility Champion. Her Toy Poodle, Louie is the first dog with the coveted AKC Agility Grand Championship in the San Antonio area. Debbie trains all the foundations skill on Courtney Moore’s very successful Border Collies, Border-pap, Poodles and Chihuahua. Debbie is an AKC agility Judge & a retired middle school science teacher, she is the Alamo Dog Obedience Club Treasurer, the president for the Poodle Club of San Antonio, Bexar County Kennel Club Agility Trial Chairperson and Vice-President of the Bexar Regional Agility Team. She also instructs Agility at K9 Country Club in Bulverde, Texas & does private lessons at her home training center in Spring Branch, Texas. She can be reached for private lessons at 210 378-4202. Text/call and leave a complete message. 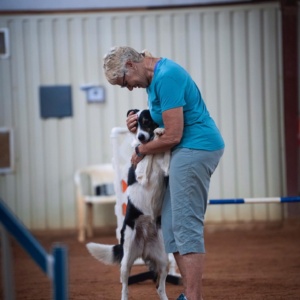 Chris started training her first dog, Sheena in 2005 at some basic obedience classes. On completing those, she was looking for something else to build a stronger relationship with her dog and have some fun. A friend suggested trying agility and shall we say the rest is history. Chris began competing in agility in 2009 and they attained their first Novice title in 2010. To date she has59 titles on 5 quite different rescues, trained as adult dogs with a variety of behaviors to overcome. Her fourth rescue, Larry, has been the most challenging by far, as well as the most rewarding. She is now competing at the Masters level in AKC and USDAA with both Larry and Bekkah, a border collie found at HEB in 2018. They will be attending their first AKC Nationals (NAC) in March 2021. Chris is an ACT evaluator, a member of Bexar Regional Agility Team, Bexar County Kennel Club, Alamo Dog Obedience Club, and the Poodle Club of San Antonio. She serves as Chief course builder for their agility trials and for other clubs in Austin and Bell County. Bekkah and Larry both have Advanced Trick Dog & Barn Hunt titles. 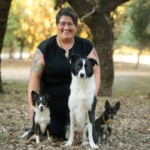 Courtney Moore started training dogs as soon as she could walk. She put a CD obedience title on her toy Poodle, Mikey when she was 7 years old and convinced her mom, Debbie to start agility training after watching it in Houston. Before they knew it they were traveling all over Texas showing in agility and both mom and then daughter became AKC agility judges. Courtney is a very popular AKC, UKI & USDAA Agility Judge. She stays busy training & showing agility, dock diving, Fast CAT and barn hunt with her Border Collies, Chihuahua, Papillon-border Collie and Toy Poodles. She is a Vet Tech by day and a popular seminar presenter, she has a passion to help agility exhibitors improve their connection with their dogs. 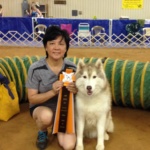 Helen Rhodes is a well know trainer and exhibitor who successfully shows and titles her Siberian Huskies and schipperke in both conformation, obedience, Fast CAT  and agility. She is fun to train with and enjoys helping student be successful with all different breeds of dogs. She is the Vice-President of Alamo Dog Obedience Club and is active in her national breed clubs. 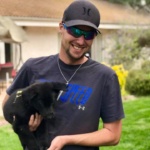 Matt Palmieri hails from California where he taught agility and judged USDAA and UKI agility. He has a passion for helping people train their puppies and beginner agility dogs. He enjoys training his dogs, German Shepards, Cattle Dogs and Border Collies in agility, rally, conformation, herding and Fast CAT. Matt owns his own Interior Design business and is the winner of the 2020 Parade of Homes.